Governor Chris Sununu signed SB12 “Constitutional Carry” into law today during a ceremony in the Executive Council Chambers. The Governor was joined at the bill signing by House Majority Leader Richard “Dick” Hinch along with other sponsors of the bill and members of the public. The newly enacted law removes the licensing requirement for individuals to carry a concealed firearm. When the bill passed the House, Representative Hinch praised it saying “Republicans were proud to lead the fight for the passage of this important and long overdue bill. Law abiding gun owners deserve that their rights be fully upheld and this bill reverses current law creating unnecessary barriers.”

Following today’s bill signing by the Governor, Majority Leader Hinch said “We were proud to work with our colleagues in the Senate to get this bill to the Governors desk. New Hampshire is excited to stand with our neighbors Maine and Vermont as a Constitutional Carry state”. 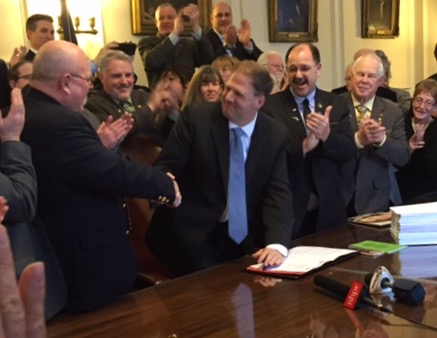