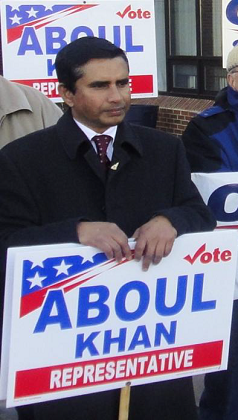 It comes as no surprise that Aboul was the top vote getter (higher than the President himself) in the town of Seabrook. Everyone knows Aboul, whether it’s from his convenience store Richdale on Route 1, or from his two terms on the Board of Selectmen, or his Vice Chairmanship of the Rockingham Planning Commission.

Aboul was born in Bangladesh, and immigrated to the United States in 1981. He moved to New Hampshire 13 years ago to be closer to his daughter who was attending school here.

Aboul decided to run for Representative to bring the small town perspective to state government. Although his education is in political science, he wanted to serve on the Science and Energy committee because of the importance of the Seabrook Power Plant to his town.

Aboul is very proud of the fact that his daughter will be graduating from Babson with a Masters degree this month, and his son is a freshman at Bryant College in Rhode Island

Please congratulate him at seat 249.